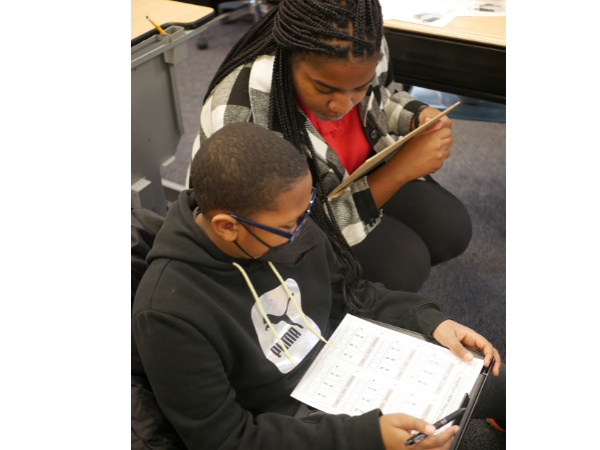 There are certain challenges that come with being a student with dyslexia. There are also challenges to being a new student. The reason I can relate to what current students are doing/thinking/feeling is because I did it/thought it/felt it all too. —Meribor Matusow (Siena ‘18), Events Coordinator

As part of Dyslexia Awareness Month, Siena is again reflecting on the strategies we regularly adopt to support our students’ different learning styles.

Students at both our Silver Spring and Northern Virginia campuses have access to models of success and resources every day to enhance their learning and dyslexia advocacy, such as daily slides highlighting notable people with dyslexia, assistive technology, and a regular emphasis on self-advocacy.

In making the transition from Siena students to Siena staff, these alumni regularly model success for students while also providing an additional layer of understanding as former students.

Siena is there to provide a mentor-mentee relationship where it’s tailored toward the needs of the student and their learning differences. I know that personally because it was 9 years as a student for me. —Brandon Butsavage (Siena ‘16), Office Manager

A particular benefit of alumni working at Siena is that they can see aspects of themselves in current students. “Every student reminds me either of a classmate or of myself,” Brandon Butsavage recently shared, underscoring the unique perspective that Siena alumni bring to their interactions with current students.

Paraeducator Ryan Salomon has applied his experience as a Siena student to his current work in the classroom and in after school. “I understand how Siena teaches and how our students learn best,” he shared. Salomon credits his awareness of how to keep students engaged and focused to his years as a Siena student who had to learn how to do the same. When helping elementary students with their homework during after school, for example, Salomon has applied some methods for spelling and sounding out words that he learned as a student.

Similarly, Perry Singletary recently gave elementary student Grayer a lesson in discovering how he learns best in math class. Having worked with elementary students in previous jobs, Singletary is now a paraeducator with Siena’s elementary team. When Grayer couldn’t quite figure out an addition problem in Prodigy, Singletary shared, “I realized how I could help him through the process because he was doing something similar to what I did as a student—and still do now.”

Instead of trying to do the math problem horizontally on the laptop screen, Singletary rewrote the problem vertically on a whiteboard to show Grayer a different way of seeing—and then solving—it that worked for him. Once they worked together to break down the problem on the whiteboard, Grayer went back to Prodigy to enter the solution.

Using a multisensory accommodation helped Singletary lead Grayer through the mathematical process because the same approach has worked for her in the past.

Recently, Singletary also helped give 4th grader Sofia a lesson in self-advocacy. Sofia was hesitant to ask questions in class because she was worried about being wrong or being the only student who didn’t know the answer. “I reminded her that no question is a bad question—especially at a school like Siena,” Singletary noted.

Like Roy, Meribor Matusow has continued to apply the lessons in self-advocacy she learned as a student. “Modeling success as someone with dyslexia isn’t about how fast/well I can read and write now,” she shared. “It’s about being able to go into life as an adult and find or create accommodations that I need to be successful.”

Resources for Dyslexia Advocacy and Accommodations

As Siena staff members, these four Siena alumni regularly teach students lessons in accommodations and self-advocacy, as well as model success for life after graduation.

This blog post on dyslexia advocacy and accommodations from Dyslexia Awareness Month 2021 highlights the assistive tools, support networks, and principles of self-advocacy students have access to.

Learn more about self-advocacy at Siena and Siena’s alumni community on our website.